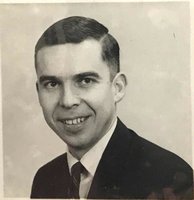 Richard Davey Northrop of Wytheville, Virginia, died unexpectedly on January 28, 2021. He was born in Stamford, Connecticut, on February 28, 1937, where he grew up. Deeply shaped by his childhood culture of small-town New England during the Second World War, he lived a life of care, faith, dedication to duty, personal responsibility, and loyalty to his family, friends, neighbors, church, and country. He will be sorely missed by all those whose life he touched. Dick attended King School in Stamford (his graduating class had only six students!) before going on to Yale University, where he majored in history and served in Army ROTC. After graduation he served as a lieutenant in the Army, trained as an intelligence officer to interpret aerial imagery; his term of service was extended by several months during the Berlin Crisis, when these skills became especially important. Once honorably discharged to civilian life, he worked in banking for many years. Starting in 1962 at First National City Bank in New York City, he went into the management program for young executives, where he met Cornelia (“Nini”) Thompson, whom he married in 1965. Nini survives him, along with their two children and spouses, Douglas (Sarah) Northrop and Nancy (Ronald) Northrop Wolanski, as does Dick’s sister, Judy, who lives in California. He is also survived by four grandchildren: Jeremy and Sawyer Northrop, of Michigan, and Alexandra and Christian Wolanski, of Rhode Island. Dick continued to work at the bank (which became part of Citibank) as a loan officer. The family lived in northern New Jersey until 1974, when Dick’s distaste for the arduous commute into New York persuaded him to move southward. He accepted a position at Maryland National Bank, in Baltimore, which continued until 1990. Thereafter he worked as financial/business manager for a private school, the St. Paul’s School for Girls, until retirement in 1997. At that point he and Nini moved to a home in Wytheville – having loved for decades the mountainous Shenandoah Valley and Appalachian region. They lived happily in southwestern Virginia until his death, actively taking part in local social and charitable circles, serving in many capacities for their church family at Draper Valley Presbyterian (as they had done previously at churches in Maryland and New Jersey), and traveling widely within the United States and around the world, reaching destinations as farflung as Australia and Russia.